I could not get out of bed this morning. This tends to happen to me on Sunday’s because I know during the next 5 days I will be required to get out of bed at an early hour. I’m not the type of person who responds well to people telling me what I have to do. I’m not dumb enough to think I can live a life with out any rules but I feel there is a way for people to say something needs to be done. But I digress.
Breakfast
I had a BBQ meatball sandwich on a Pepperidge Farms Deli Flat. 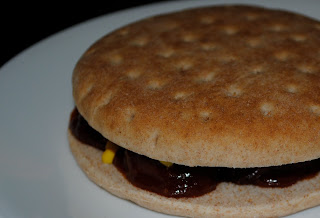 My meatballs were topped with mustard and spicy pepper jardinera: 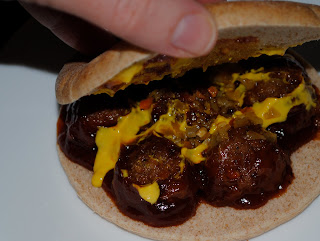 Might not look all that great but it was scrumptious!

Lunch
I was craving some Chinese food so I had some delivered. Since I had such a great experience at Tamarind it was a no brainer that I would order from them.
I ate half of this egg roll: 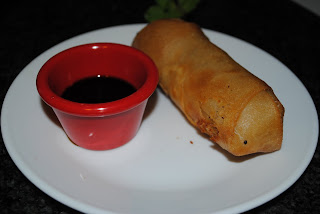 The egg roll was not as good as it was the first time I had it. There was kind of a sour taste to it.
My main dish was Chicken Fried Rice which was very good: 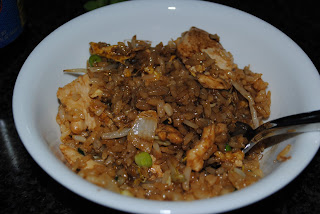 And here is the really bad part. I ordered dessert. Not just one dessert but 2 🙁 I did have good reasoning to order both of them or at least I think it was a good reason.
First dessert was a warm apple wanton with a caramel drizzle. See my husband really likes apple pie so I thought this dessert would win him over: 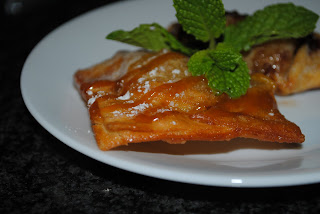 However, he wasn’t really into it but I thought it was really good.
The second dessert was ordered for me, I thought it sounded divine. A warm banana wanton with a chocolate drizzle on top: 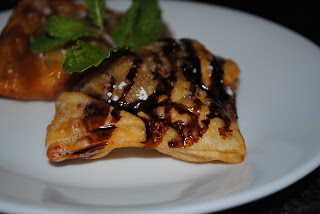 I actually didn’t like this one at all which is so shocking because I love banana! I only took one bite of the banana dessert.
Question:
What is your favorite Chinese food dish?
My favorite is snow peas, bamboo shoots and broccoli in a kung pow sauce. This dish has no name but I always request it. I’m one of those pain in the azz orderers but I make up for it in the tip:)
Previous