Yesterday was much better than Tuesday. I still had a ton of stuff to do but I took a more relaxed approach to it and all was good.

This is a pretty long post so if you are only going to read one section I highly recommend the “Happy Hour” section. I’m just so impressed by the bartender!

I was determine to have a good morning so I stopped at Starbucks before I stepped foot in the office. 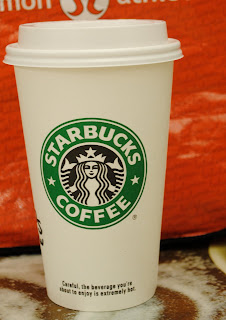 Can anyone translate the “chicken scratch” on my cup? 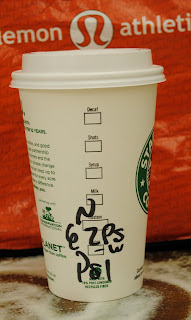 I wasn’t sure if the latte itself would start my day on a happy note so I paired it with a Pumpkin Scone. I really enjoy the combination of these two so it’s no surprise that it totally hit the spot.

Ceres was calling my name. The Wednesday’s specials are drool worthy. 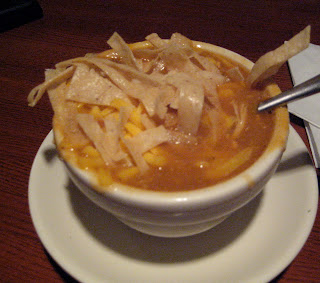 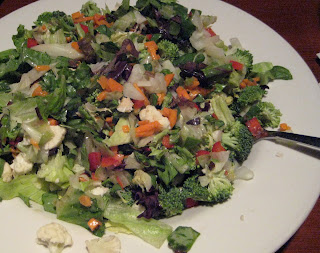 I needed to do some shopping at Whole Foods after work. I could spend hours looking at all the goodness Whole Foods has to offer. However, my husband does not have the same enthusiasm when it comes to grocery shopping so I dropped him off at the Bar next door. I look forward to Whole Foods and P looks forward to reading his kindle while having a cocktail. It works for us;)

After I was done with my shopping I met him at the bar, Binny’s. We ordered a cheese, almond and bread platter. I can’t remember the name of the cheese but it was dreamy. I commented to the husband that it’s been along time since we had some really good cheese! 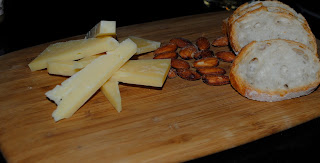 I wasn’t sure what to order for my cocktail so I asked the bartender to make me a cocktail of his choice. I knew I didn’t have to worry what he would bring me because he is by far the most knowledgeable bartender I’ve ever met! He not only knows a lot about all kinds of alcohol but he takes pride in the drinks he makes.

He chose a vodka old fashioned using Zubrowka Bison Grass Vodka. Once the drink was completed he brought it over to me and then lite an orange peel on fired and threw it in the drink.

It was so cool and I thought it was just for show until I took my first drink. The fired up orange peel gave the drink a bit of caramelized flavor. Another thing it did was give the cocktail an amazing aroma. This was the first cocktail in my life (and I’ve had a few;)) that stimulated multiple senses; taste and smell. I’m telling you this bartender is something special when it comes to making cocktails! 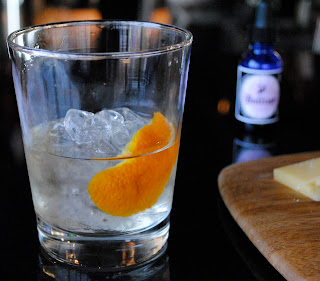 On the way home we spotted a TV show, titled Ride Along, being filmed in Manny’s Deli. 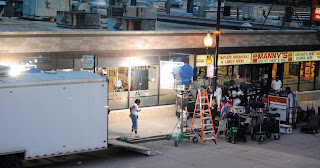 Quick, simple, cheap and tasty just how I like my dinners at home!

Steamed some baby carrots, asparagus and corn. Mixed the veggies in with rice and topped it with soy sauce and Cholula hot sauce. 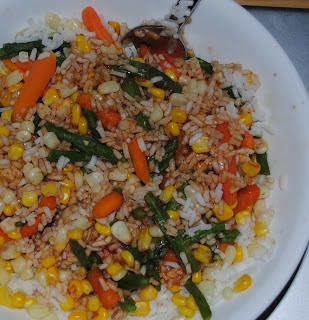 Yet again simple and tasty! Barney butter and Trappist Pomegranate Jelly on a hot dog bun.

I’ve been dehydrated lately so throughout the night I sipped on my big jar of water. Whenever I drink water out of this glass it reminds me of my dad. When I was little the only glass he would ever drink water out of was a big ball jar:) 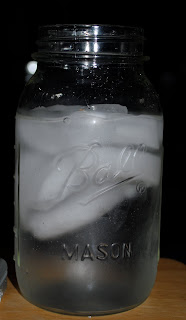 Just a reminder that voting ends today. Even if you don’t want to vote please check out my submission here. I think it sums up me and my blog perfectly!

Have you ever been really impressed with a bartender? Where were you and how did they impress you?