I decided to try and make my own pickled Jalapenos instead of using the supermarket jarred variety. If you decide to do this you will need to make the pickled jalapenos a couple day’s before you intend to serve the french bread pizza.

Put jalapenos into a medium/hot cast iron skillet until the peppers start to blister. 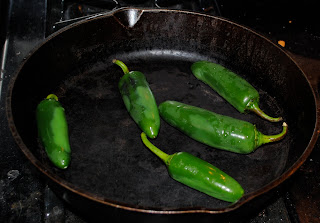 Once they start to blister transfer them from the skillet to a Pyrex type bowl. 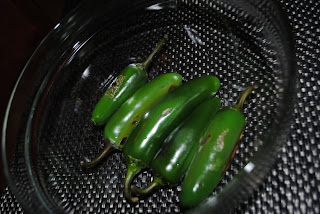 While the peppers are cooling bring the vinegar and sugar mixture to a boil on the stove. Then pour the mixture over the peppers. 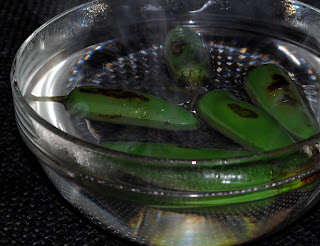 Let the mixture and peppers cool and then put them in the fridge for a couple days.

I decided to use KerryGold Aged Cheddar cheese.  This is my very favorite cheese so it was a no brainer that I would use it.  However, you can use any type you would like. 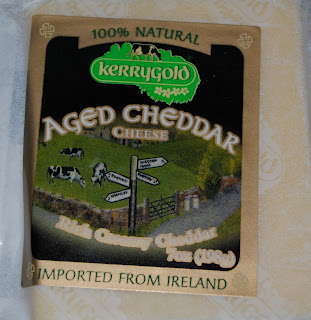 I used a standard grater to shred the cheese. 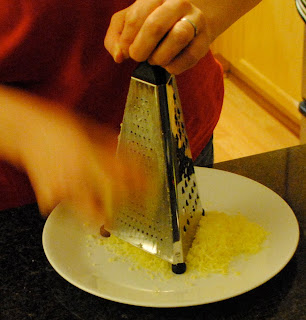 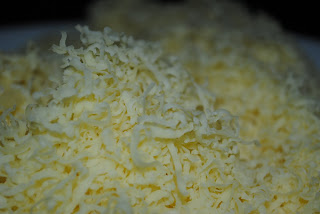 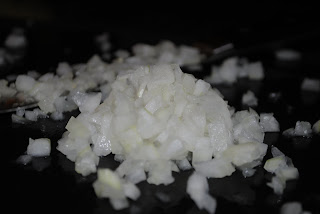 Here is a look at the sausage before I cooked it. I had never worked with this type of sausage before so I wasn’t exactly sure how to cook it. I bought it at Whole Foods and the counter guy gave me the instructions. 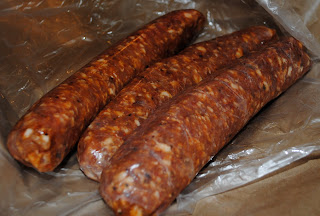 I placed the sausages in boiling water for about 10 – 15 minutes. 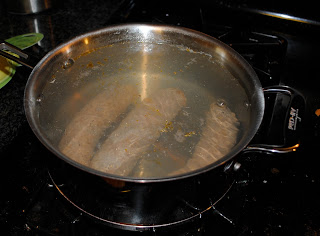 I then seared them in a hot skillet to make them nice a brown.

I cute up the sausage into little pieces and placed them in a cast-iron skillet alone with the onions.  This is where you can add salt and pepper. 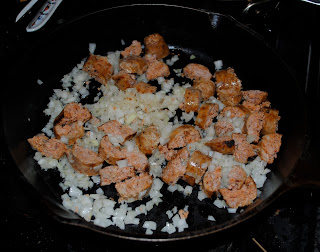 Cook until they brown. 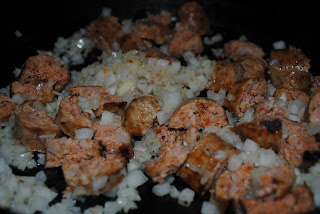 Then throw about a 1/2 cup of beer in the skillet.  (fyi…this was the first can of beer I ever opened!) 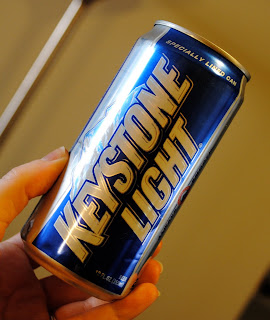 Take the loaf of bread and cut it in half length wise. 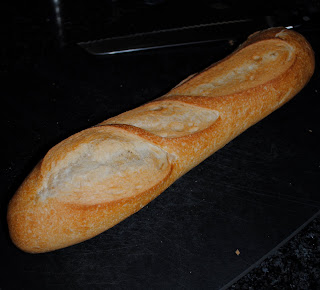 Place bread on a sheet pan and toast in a preheated 350 degree oven.  Once the bread is lightly toasted remove from oven.

Place the cooked sausage mixture over the toasted bread and top with the grated cheese.  Increase the oven temperature to 400 degrees and return pizza to oven.  Cook for 5-7 minutes or until the cheese is bubbly. 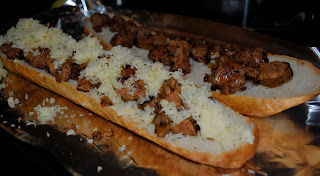 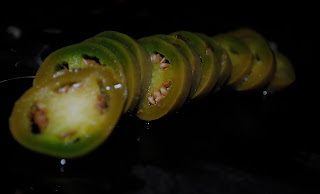 Place the jalapeno slices on top of the cheese and enjoy! 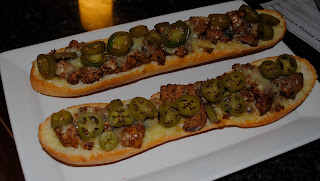 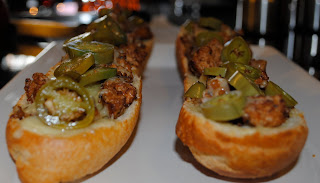 * This recipe is slightly modified from chef Donald Link of Hersaint in New Orleans recipe.
My review:

This recipe provided some challenges for me. First, I had never cooked raw sausage before. Second, I had never attempted to pickle jalapenos. But overall it wasn’t complicated to make and I would totally do it again.

There are a couple of things I would do different next time. I would make sure the bread was bought the morning of use. I bought the bread the night before and by the time I needed to use it, it was really hard. I would also use Vlasic Jar Jalapenos instead of making my own. I like a little bit more bite to my pickled jalapenos and I didn’t seem to get that in the ones I made.

Perfect Super Bowl food!
His review:
First up was french bread pizza.  She probably described it, above, so I’ll skip that except to say it was by far the most complex pizza-related endeavor I’d ever witnessed (speed-dial features largely in most of my past experiences).

The flavor was very complex — the mix of vinegary peppers, extremely sharp cheddar cheese, and crumbled sausage worked really well, I thought…but it wasn’t a mix I’d expect from a pizza. The bread was crusty and a little hard, but within the range I’d expect from a baguette. Tracey later explained it was a little old and I do think that a slightyly softer bread would have made it easier to eat. It proved a solid vessel for Garlic Tabasco Sauce (an important factor in my review of any food), though the blend of flavors didn’t require it.

Overall, I’d give it 3.5 our of 5 stars, with softer bread and a bit more of a bite from the jalapenos pulling it into solid 4 range. I’d probably look at it as an occasional stand-in for pizza as it lacked the tomato sauce and pepperoni that more or less defines that genre for me.